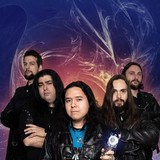 Formed in 2002 by guitarist , songwriter and producer Gabriele Palermo.Tragedian was concieved from the idea of combinding musical virtruosity,speed ,heaviness and melodic elements within a variable format.Taken notes from such influence's as N.W.O.B.H.M.,Shred and German Melodic Speed Metal ,and rather than trying to reinvent a wheel thats been reinvented a million times,Tragedian takes the best elements from each genre and makes thier own interpretation.