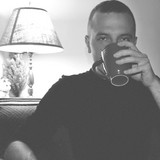 Bring Prudence confronts seduction, alienation, and loss of innocence. He employs a cast of characters, often alluding to theater, fortune-telling, and 90’s pop culture. His work is autobiographical, supplemented by childhood lore, altered memories, and dreams taken to their most absurd conclusion. Oleh moved to Illinois from Ukraine when he was 13. To cope with isolation, he started writing poems and recording songs into his cell phone. By 16, he had saved up enough money from his Dunkin Donuts job to buy “Jasmine” - the only acoustic guitar he has ever owned. After playing in several high-school and college bands (You Can't Go To The Restaurant Like This, Pursued By a Bear, Win Win, Bad Bad Hats), Oleh started his own project - Bring Prudence. In 2013, he self-released Aliens, earning praise from The Current, BIRP, Indie Rock Cafe, Recent Music Heroes, Echolalia Radio, and The Bomarr Blog. Later that year, he began playing shows around New York City, sharing the bill with Sanjaya Malakar, Queen Kwong, and Charlie Brand. Meanwhile, every Sunday, Oleh and his friends held a workshop in the kitchen of their Crown Heights apartment where they motivated each other to make art on a regular basis. With the help of his friend Jared van Fleet (Beirut, Voxtrot, Sparrow House), Oleh fleshed out and released the resulting full-length debut Red Horses via his own label Brilliant Green Records in 2016.