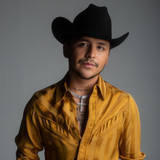 Christian Nodal is a charting singer and songwriter whose sound weds norteño and mariachi by using the accordion to bridge traditions. Nodal was born in 1999 into a musical family; his parents and many of his uncles, aunts, and cousins are musicians. He began writing songs at age 13 and posting videos of his performances on social media. He drew the attention of Fonovisa's A&R department, which signed him in 2016. After inking his record deal, he appeared as a featured vocalist in the video for Los Plebes del Rancho's hit "No Pasa de Moda," which garnered over 22 million hits. Nodal's own debut single, the Salvador Garza-penned "Adios Amor," reached the top spot in the Mexican Regional Songs chart and peaked at number two on the Top Latin Songs chart, where it spent over 25 weeks. The video racked up nearly 300 million views. Nodal followed it with three more singles, including "Problamente" featuring David Bisbal. The latter track placed in the Top 20 on the Mexican Regional Songs survey and within the Top 40 on the Top Latin Songs chart. His debut album, Me Dejé Llevar, was released in August 2017. It topped the Mexican Regional Albums chart, peaked at number two on the Top Latin Albums survey, topped the Mexican Regional Albums chart, and brought home a Latin Grammy.