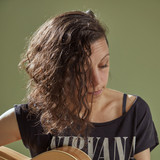 Combining acoustic guitar and a light and warm voice, Amy's music expresses a subtle mix of genres. Pop, folk, soul, rock and reggae influences are all part of her music, bringing a freshness to the new scene.   Her debut album, "The Sunshine LP", attracted the attention of several local venues and radio stations upon its release. She notably remains 4 consecutive weeks in first position of the Top 10 of NIKY Radio, with her song "Alors Comme Ça".   In 2020, she produce her second album, "I'll Be Alright", which differs from the previous one by its brightly coloured notes, whose emotions are imbued with a more alternative, soulful and bluesy atmosphere.This album is now available everywhere since September 23th, 2021.