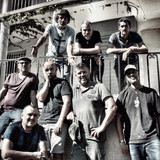 Kanjar'Oc was formed in 1989 at Port-de-Bouc (FR), a small industrial city near Marseille. The collective quickly takes a liking to the scene. In 1994, he released his first summer tour, the "Occitan Tour", which carries the band throughout the great South of France. It was not until 1996 and the release of the first 7 tracks CD "Furia Kanja" to see the band doing 80 concerts in one year. At the end of 1997, the band released a 4 tracks live "Fait Tournée" and return on a tour of 150 concerts in two years in France, Spain and Italy. In 1999, Kanjar'oc realize "Kamino Real" at Globe Music/Sony. 300 concerts are then scheduled over two years. In 2002, Kanja returns live with "L'Âme de Feu" and increases his concert's capital. In 2003, after some internals (r)evolutions, the band tightens the ranks with a more massive sound and started a series of festivals during a new tour in France, Spain and Sweden. In 2004 released the album "Live & Direct" on the french label Small Axe. But the label soon puts the key under the door. After a few dates in France, the Czech Republic or Spain, the group tired of these 15 years of tours, decided to make a break. At the end of the 2000s, Kanjar'Oc went back on stage for few dates: Caracas in 2007, Agadir, Port-de-Bouc and Martigues in 2009 to celebrate the band's 20th anniversary.