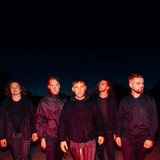 English post-hardcore band SHVPES grew out of the demise of an earlier iteration when vocalist Griffin Dickinson came aboard in 2015. The band expanded from a metalcore sound into something closer to more aggressive alternative hard rock with touches of hip-hop on their 2016 debut full-length, Pain. Joy. Ecstasy. Despair. Birmingham band SHVPES existed first as Cytota, forming in late 2009 and remaining active with little fanfare until 2014. Made up of singer Joby Fitzgerald, bassist Oliver Pike, drummer Harry Jennings, and guitarists Ryan Hamilton and Youssef Ashraf, Cytota played a blend of post-hardcore and metalcore, releasing a single EP in 2012. In 2014, Fitzgerald left the group and was replaced by Griffin Dickinson. The band's new singer was coincidentally the son of Iron Maiden vocalist Bruce Dickinson. In a state of reshuffling, the band changed their name to SHVPES and began reworking their sound to include nods to hip-hop, nu metal, and alternative rock, sometimes including sections of rapping and DJ record-scratching theatrics in their new material. The band released several singles, beginning with 2015's "Shapes." Pike left the band to be replaced by Grant Leo Knight and they completed work on their 2016 LP, Pain. Joy. Ecstasy. Despair. They toured extensively in Europe and the United States and returned in 2018 with second album Greater Than. ~ Fred Thomas, Rovi