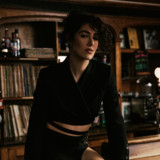 Naomi BanksAn artist with boundless depth and fearless devotion, Naomi Banks is a vibrant new talent defined only by her lust for creative freedom. The UK vocalist and songwriter emerged in 2019, after a number of appearances on stage singing for the likes of Laura Mvula and Lianne La Havas, and collaborating on a studio project with Keane. Inspired early on by studying everything from Jazz, electronica, R&B and soul, her career so far is less defined by any one genre as she firmly finds her lane in the alt pop arena. Naomi found early success with debut single ‘Enough’, going straight onto the playlist at BBC Radio 1, and now counts Clara Amfo, Ricky Melvin & Charlie and Jack Saunders among her key supporters. Since then she’s earned praise for her impressive vocal range and rich musical pallet from the likes of gal-dem, Complex, Reprezent, BBC Radio 1Xtra, Notion, Clash, The Line of Best Fit, Gay Times and The Independent. Her first few shows in the capital allowed Naomi to prove her live prowess alongside Celeste and Rachael Chinouriri, as well as selling out a host of her own headline dates, and now looks ahead to more London headlines on the horizon and further UK touring for 2022. No sooner than establishing her sound on the debut EP ‘Meeting Again’ in 2021, she began redefining herself through a broader mixtape project. With every new release, Naomi Banks is becoming more and more difficult to pigeonhole, and even more difficult to ignore.