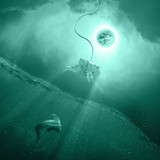 It's 1979 and you drive your parents choking car down a cracked road past the dump. Through the radio, distorted scratchy guitars rattle the speakers. A bright young German batchelor shouts, most certainly in your direction, and powerfully emboldens you to carry on, with his lyrical visions of the future, everyday struggle and ultimately the hope therein. The newly released retro sound of DELTAWELLE puts the listener in a timeless stand off, sonically exploring the tension between opposites. The old resurges against the new while the emotional compass is weathered violently from track to track. Front man Franz Schneeweiss demands your attention with a bold and youthful vocal leadership, a feather-light tone owned with a formidable yet welcoming aggression. He calls you to arms while reminding you to count your blessings. The four musicians of DELTAWELLE are a stone cold new wave indie band: they provide their audience with catchy melodies and poetic German lyrics but also insert broken rhythms and some irresistable punk rock humour. For a year DELTAWELLE have been playing successfully in the clubs of their hometown Berlin. "It's been a surprisingly good year for us since we've only been there for a year, giving interviews, playing a lot and working on new songs almost every day." After their debut ep "Atme (Breath) " their first full album "Kosmos Kann" is a matured and richer extension of these initial themes. Out now!