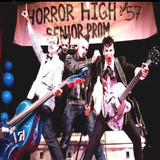 Out of the graveyards and onto the stage, Cold Blue Rebels mix driving psychobilly beats and 50's rock with the gore ‘n’ schtick of classic horror films. The band is de-composed of four veteran Sunset Strip rockers: Mickey Finn - Vox, Danny Dangerous - Bass, Joe Normal - Guitar, and Spazz Draztik - Drums, who've returned to haunt the nightclubs and howl with a sound that grows on you like moss on a crypt. CBR trace their gnarled roots back to a twisted version of the birth pangs of 50's rock n’ roll, when Elvis's curled-lipped sneer met the startling onstage antics of Jerry Lee Lewis.

Three decades later, in the heyday of the Sunset Strip, the demon seeds were planted when Mickey Finn and his hard-rocking glam band Jetboy, signed to MCA records, and Joe Normal and Danny Dangerous inked a deal with their purple-haired, glam punk rock outfit, The Zeros, while Draztik's Glamour Punks imploded in true punk style. Outta those dyed-roots sprung friendships that lead to collaboration in the summer of 2009 fueled by their excitement for Rockabilly & Psychobilly music. It was then that their undead selves emerged from the earth as Cold Blue Rebels.