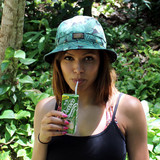 Erica iji is an English/Nigerian, Singer/songwriter. Erica began writing & performing her songs in her teens & released her first studio album ‘I Am Erica’ with producer & songwriter Steve Marshall. After gaining a large Myspace following and the attention of major labels, in 2008 Erica’s vocals featured on the album ‘Scratch Came Scratch Saw Scratch Conquered’ by the pioneering dub & reggae producer Lee ‘Scratch’ Perry. The track entitled ‘Heavy Voodoo’ also featured legendary Rolling Stones man Keith Richards on guitar. Following a move to London to further music opportunities, Erica met Kiss FM’s ‘DJ Matchstick’, with whom she worked on several R&B tracks, including ‘Gotta be Love’ & ‘It’s Over’. The remix to ‘It’s Over’ by producer ‘Witty Boy’ was featured on ‘Ministry of Sound’ compilation ‘The Sound of Bassline 2’ released in 2009 the album featured the likes of Skepta, Kid Cudi, & Giggs. Erica's sound took another twist when she teamed up with house producer ‘Kenny Hectyc’ to create several tracks. Their collaboration ‘Like a Ghost’ was released on the record label ‘Freakin 909’ of house music legend ‘Marshall Jefferson’. Erica continued the house sound working with Russian ‘Max Olsen’ to create the single ‘What happened to Our Love’ which was released on ‘One Fold Records’ in 2017. Erica continues to work with other house producers with several tracks in the pipeline, while also writing & recording for a new R&B project set for release in 2018.