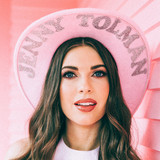 With a razor-sharp wit and throwback sound, Jenny Tolman is on deck to become her generation’s Roger Miller - a comedic troubadour with a decidedly feminine perspective, offering savvy wordplay and wisdom far beyond her years. With titles like “High Class White Trash,” her debut album There Goes the Neighborhood lit up Nashville in 2020 by delivering engaging snapshots of small-town life in the fictional Jennyville. Not many new artists would step into the spotlight quite so brazenly but doing so has been worth the gamble thus far for Tolman, with the Nashville Scene singling out There Goes the Neighborhood as “Best Country Debut Album,” while The Tennessean named her an “Artist to Watch” and MusicRow Magazine included her in its “Next Big Thing” Class of 2020. Pretty heady stuff for a 25-year-old whom veteran Music Row writer Robert K. Oermann says is