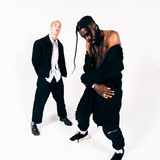 So Loki formed in 2016 as a collaboration between Rapper Sam Lucia and Producer Geoff Millar. So Loki had their first large successes with the singles Athletes World and Elephant Man both off of the Planet Bando EP, which began to build their buzz online. Shortly after the Planet Bando EP came So Loki’s collaborative project with fellow Vancouver artist bbno$. The Whatever EP was a rapid success and has since generated nearly 38 million streams across platforms and almost 4 million views between two music videos. Following the Whatever EP So Loki went largely underground, creating their highly anticipated full length album “SPACE GOD”, released in 2021. SPACE GOD departs from their earlier work in favour of a futuristic rap soundscape full of bass heavy, synth laden production which is heavily influenced by Kanye West's Yeezus, Gorillaz's Demon Days and Lil Uzi Vert's Luv Is Rage 2 (Deluxe). SPACE GOD’s lead single NUMB , was featured on Spotify’s Tear Drop playlist where it stayed for 2 months while generating close to 150,000 streams. In May of 2021 So Loki dropped their first followup to SPACE GOD, Turn My Swag Up, a chaotic, distorted, turn up anthem with a matching video.