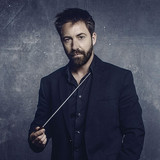 Composer, orchestra conductor and pianist, Timón is a unique and rare breed of artist who alternates between composing for film and tv, concert music, and creating and conducting massive live shows. From epic orchestral to electronic minimalism, the versatility of his prolific output has positioned him as one of the most brilliant Spanish artists of his generation. Based in Los Angeles, some of his most notable credits include Marvel’s series Agent Carter (working for C. Lennertz at the Sonic Fuel Studios), horror films such as Nagual, by D. Lazarovits (Insidious, American Horror Story), dramas such as the American/Chinese production Hathor, features and tv series such as In Absentia, The Bestowal and The Little Wizard and the documentary San Mao. He has composed soundtracks for National Geographic in a variety of worldwide broadcasted documentaries. Timón is the composer and conductor of Maestro, a live show which looks over the last 30 years of electronic music, merging a symphonic orchestra and dance music. In the classical music field, he has been chosen to be the Guest Composer of the Palau de la Música in Barcelona (Season 20/21). During his tenure, he will conduct the European premiere of J. Williams’ Scherzo for Piano and Orchestra. He has performed in some of the most relevant European venues such as Barcelona’s Gran Teatre del Liceu, Madrid’s Teatro Real, Birmingham's Symphony Hall, Berlin’s Konzerthaus, Newcastle's Sage Gateshead and Paris’ Cité de la Musique.