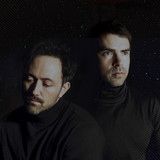 Dig if you will the picture: a cool, electronic breeze filling every void with catchy, funky synth frills; and a voice not unlike young Wayne Coyne, addressing technological, spiritual and extraterrestrial quandaries in a love letter to a world where suddenly, everything has changed. Organic and grounded as it is densely layered with aural easter eggs for your tympanic membrane. It’s danceable pop juxtaposed against the sociological nightmare we’re all living. This is earphone candy for the new world. Praise & Warships is Chris Wheeler and Brenton Clarke Little. Their joint music venture began when they met in the early 90s, when bowl cuts and cargo pants were still very much in style—tinkering with instruments Chris' dad would bring home, but somewhere along the way Chris’ dad slipped us a bright pink cassette tape of a band called Jellyfish, and everything changed forever. Now — 20 years since their first band departed — the two have reassembled forces to usher listeners into the socially unstable ‘20s with a scientific and sincere message. “It’s silly and very serious, funky but spooky, simple yet complex,” Brent says. “Just the right amount of what the brain needs.” Pushing boundaries, bridging divides with subtle themes of science-fiction and relationships, the two have culled this growth and knowledge to form their current moniker: one that hints at a spiritual vein in their craft as well as an impending sense of fear that is life in the 21st Century.