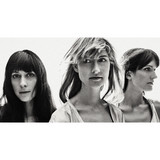 The Brooklyn indie pop outfit Au Revoir Simone features Heather D'Angelo (vocals/drum machine/keyboard), Erika Forster (vocals/keyboard), and Annie Hart (vocals/keyboard). Borrowing their name from a minor character in the Tim Burton comedy Pee-Wee's Big Adventure, the Casio-centric group came together in late 2003, when Forster and Hart befriended one another while traveling by train from Vermont to New York. From there, they became fast friends and began writing songs together. D'Angelo and Sung Bin Park (keyboard/vocals) were added to the dreamy pop fray after contributing to many practice sessions, but Park left in January 2005 to pursue other projects. A year later, Au Revoir Simone issued their debut album, Verses of Comfort, Assurance & Salvation. It was self-released in the United States and appeared on the Moshi Moshi label throughout Europe. Additionally, the song "Through the Backyards" was included in the season finale to Grey's Anatomy that spring, thus boosting the trio's profile. Au Revoir Simone's second album, The Bird of Music, was released one year later, while a track-by-track remix of the record appeared in 2008 under the title Reverse Migration. The trio's third album, Still Night, Still Light, was produced by Thom Monahan and released by Our Secret Record Company in spring of 2009. After taking a long break from the band, during which each member pursued their own individual musical pathways, the band reunited to record and release their fourth album in late 2013. Co-produced by the trio and Jorge Elbrecht of the band Violens, Move in Spectrums was issued on legendary producer Richard Gottehrer's revived Instant Records label. ~ MacKenzie Wilson, Rovi