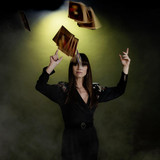 With just a demo, Ana Fernández-Villaverde captivated thousands of music lovers. The songs start with a simple principle but also with a disarming beauty, fabulous poetry about falling in and out of love that remind us of Los Planetas but without the noise, Sr. Chinarro but without the irony, the sweetness of Le Mans, the bared feelings of The Magnetic Fields or the romanticism of Family. More than 150.000 listens on her Myspace led to first "Romancero" and then "Fiesta" being widely acclaimed albums in Spain, always supported by the production work of David Rodríguez (La Estrella de David, Beef). "Ceremonia" is completely different from past works. A dark album, with a sound that uses the most innovative styles of the 70s, kraut-rock, post-punk, and the techno of Kraftwerk and New Order. "Premeditación, Nocturnidad Y Alevosía" is clearly influenced by The Cure or OMD, but also by Chromatics, M83 or Franco Battiato. "Fuego" is the most stylistically diverse of all the albums because musically there is a bit of everything we already know, but transgressed. "Brujería" is the

sixth album. It is out in September 2019. This time the game of mirrors is radical. Because is probably the most open and direct about emotions, where the songs touch tangentially on the mystery to dive in more deeply lyrically and epically. It is an album about love, brutal and raw, without metaphors, as is her style. Darkness and light, and each song leads unequivocally into the next.