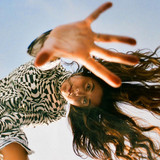 For Daniela Andrade, YouTube has served as a virtual studio, a place between the public and private where she can exercise both fear and courage through performance as an independent artist. Since the young, Honduran-Canadian, songstress first appeared there, the clarity of her voice has broken through the noise of the world’s biggest open-mic and garnered millions of fans across the globe (1.8 million subscribers on YouTube). From early, mop-headed takes on Lisa Hannigan to soaring renditions of Gnarls Barkley, her online persona has crystallized into an inimitable personhood, a glowing sincerity. In 2016, her online successes breached the real world with her first international tour and the release of her debut EP, Shore. That tour brought her across 12 countries to sold-out venues as distant as the Gramercy Theatre in New York and the Bentley Music Auditorium in Kuala Lumpur. Elsewhere, she had syncs in popular TV shows like Suits and Supergirl. Now, in 2019, as a producer, writer, performer and creative director, Daniela’s voice is coming full circle, back to the DIY spirit that sparked her initial creations. Securing support at the likes of NPR, Billboard, Complex and COLORS, the new bilingual and genre-bending EP Tamale blends glimmers of jazz-indebted soul and R&B as it pays homage to her Honduran roots.