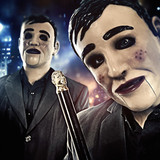 Back in the depths of 2011, two like-minded musical connoisseurs united, with the sole mission to represent the shadowy underground of raw hardstyle… Armed and ready, this cutting-edge duo has conquered and revolutionised the game in more ways than one, and guess what? There’s absolutely no stopping them on their quest for domination! Consisting of two hardstyle heavyweights and long-time comrades. Gunz For Hire was conceived through both a musical and performance-driven bond that neither could ignore. Pooling their resources, the pair sent their liaison into orbit with initial releases “Put It On,” “Kings Of The Underground”

and of course, their epic knockout “Bolivia.” Instantly conquering the scene with their signature badass sound, Gunz For Hire also displayed their gangster legacy through staggering, multi-climactic live-shows that swept up audiences up into a frenzy!