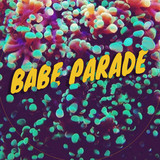 Recognized for their familiar but can’t quite put your finger on it sound, Babe Parade describes their music as “Goldilocks Rock”. Not too hard—not too soft—fits perfect in that sweet spot. The Los Angeles four-piece blends coast-driven guitar interplay with sly vocal melodies creating an invitation that's pleasant to the ears. Babe Parade began as an SFSU collective, collaboratIng on film and music projects. After relocating to Los Angeles, the group produced a self-titled EP within their first year as a band (2013). They finalized their lineup in 2015 and since then, the band has self-released and produced two singles, four EPs, and four music videos. Babe Parade has played numerous shows throughout the Los Angeles area as well as San Francisco, San Luis Obispo, El Centro, and San Diego.