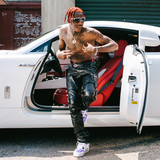 Chicago rapper Famous Dex began posting and uploading his hooky, Southern-influenced brand of hip-hop in 2015. After a few self-released mixtapes, he had some chart success with his 2018 debut studio album Dex Meets Dexter, and returned two years later with second album Diana. Famous Dex was born Dexter Gore, Jr. in 1993 and grew up on the South Side of Chicago. He dabbled in music as early as 2012, but decided to take it more seriously after the death of his mother in 2014. In 2015 he released two mixtapes, Never Seen It Coming and Dexter's Laboratory. He had a minor hit with the track "Drippy Drippy," and continued to release more mixtapes throughout 2016. In March, he signed to Rich the Kid's label Rich Forever Music and issued the hit "Drip from My Walk." The following year, the A$AP Rocky collaboration "Pick It Up" hit the Billboard Hot 100 and peaked at number 54. A handful of singles including the Top 30 pop hit "Japan" led to Dex Meets Dexter, his first proper album, in 2018. In 2019 he released two EPs, Weird vs. Crazy and Dexter 2031. After releasing the Where's Dexter mixtape in June of 2020, he returned with his second proper studio album, Diana, in October of that year. Diana featured guest spots from longtime collaborators Rich the Kid and Jay Critch, and cameos from Trippie Redd and Wiz Khalifa. ~ David Jeffries & Fred Thomas, Rovi