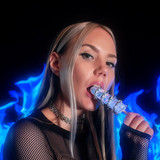 Sikk Ivy sets a goal to resurrect the sounds of 90s rave, but with a modern and dark twist. Sikk Ivy grew up in a small, Swedish village, where the most exciting thing to do was joining the church choir or dig for Viking artifacts. Sikk Ivy wanted more and became a natural born rebel who started exploring life and music. After finding her true purpose in life - creating music - she started working towards her dream by joining a band, touring around Sweden, and moving to Stockholm to study music. After a while the studies made her uninspired, where she was taught that there supposedly were rights and wrongs in music making - and that she was ‘too much’. However, inspiration sparked once again when meeting the multi-platinum producer BACALL - and Sikk Ivy’s dark solo character was created. Inspired by her feelings, her past and love for the 90s they manage to create the perfect blend of modern pop and classic rave.