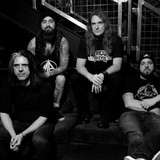 It began as a celebration of heavy metal, powered by the almost tribal bond shared between the extreme music community’s most revered trailblazers, armed with a list of contributors onstage (and off) that read like a Wikipedia entry on the genre itself. Now, with their second album, METAL ALLEGIANCE achieves the seemingly impossible once again. Beyond any doubt, the all-star “project” has cemented its position as a true band. An adrenaline-soaked, thrash-worshipping, groove-driven, diverse, yet more sharply focused effort than its no-less-impressive predecessor, the mere existence and urgent brilliance of Volume II: Power Drunk Majesty silences any doubt as to the band’s earnest intention, purposeful resolve, and resilient dedication to all things heavy metal. Volume II: Power Drunk Majesty, presents a cohesive vision, a straight-ahead almost throwback thrash attack that’s still grooving and modern. “With both albums we got together to see what would happen and in both situations, we surprised ourselves,” says guitarist Alex Skolnick. “On the first album, we were like kids in a candy store. It’s a diverse record, which is great. On this one, we went for a more unified sound, and with fewer guests.” Now two albums and one EP deep, METAL ALLEGIANCE stands triumphantly as more than a project, but as a solidified band that creates music for the fans.