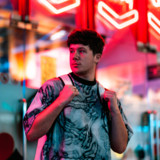 Get to know rising UK pop artist - KOOLKID... 'We all have a KOOLKID inside of us’ Hailing from Glasgow, KOOLKID was surrounded by live music from a young age. Since the age of 15, he has been building his musical identity with constant songwriting efforts, as well as cutting his teeth with live performances up and down the UK. He has penned tracks for prominent pop acts including K-Pop icons BTS, co-writing 'Mikrokosmos' from the group’s chart-topping MAP OF THE SOUL : PERSONA, 'Inner Child' from MAP OF THE SOUL : 7 and most recently Over (feat. Gabrielle Aplin) [R3HAB Remix] for End of the World feat Gabrielle Aplin, remixed by R3HAB. The Scottish singer-songwriter has been producing soaring, modern pop ballads which flaunt his emotion-drenched vocals with engrossing, forward-thinking production. His debut '2 Soon' was released in January 2020, a cleverly crafted introduction to the Scotsman’s sound and vocal ability which was followed by 'Feelings' cementing his status as one of the UK’s most exciting emerging pop artists. 'We're So Blind' is the latest offering from KOOLKID, a track which cleverly paints a picture of society today, from anxieties of sexuality and our blindness to global environmental issues and problems around the world. Recent collaboration with Dark Heart, I Want Your Body (feat. Koolkid), on Spinnin Records landed on New Music Friday Deutschland, New Music Friday Sweden, House Music 2020 and mint Japan.