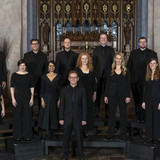 Conspirare is a vocal ensemble that performs music from various periods and styles, including many of the choral classics (much of it from the sacred genre) and a range of contemporary, traditional, and popular works. Conspirare consists of a fully professional chamber-sized vocal group that performs most of the concerts, and an augmented or symphonic ensemble, to perform larger works such as oratorios. Conspirare was founded in 1991 by conductor and artistic director Craig Hella Johnson, in Austin, Texas. It was originally called the New Texas Festival and performed irregularly until 1999, when it took on a regular schedule of concerts. The choir was established to perform a yearly week-long series of performances during the summer. The Conspirare Symphonic Choir was established in 2000 and uses amateur singers to expand the number of the group to about 38 to perform works such as the Chichester Pslams by Bernstein. There is also a third branch to Conspirare's activities, the Conspirare Youth Choirs, established in 2005, which is an educational endeavor involving the training of singers from ages 9 to 17. In this program, youthful singers are divided into two ensembles, the Kantorei and the Children's Choir. Children and teens from this program also assemble for occasional appearances in concert. A typical Conspirare concert will likely feature a colorful mixture of choral pieces, something like the following program: an arrangement of a Dolly Parton or Carly Simon song; film composer Ennio Morricone's Gabriel's Oboe; sacred music by Pizzetti; a Stephen Foster number; and maybe a traditional song like Deep River. The ensemble gives a regular slate of concerts each year in Austin and nearby communities. Its Austin-based concerts take place in a variety of locations, from St. Louis King of France Catholic Church to the Long Center for the Performing Arts. The group also tours and has appeared on radio and television, including a 2009 PBS broadcast of A Company of Voices: Conspirare in Concert. Conspirare has recorded for the Harmonia Mundi, Clarion, and Delos labels, as well as self-releasing its yearly Christmas album. In 2004, the ensemble made its first recording, Through the Green Fuse, a collection of mixed fare on the Clarion label. Conspirare's second recording, Requiem, which included music by Howells and Pizzetti, was released in 2005. Issued on the Harmonia Mundi label, it achieved broad critical acclaim and drew two Grammy nominations. Conspirare received another pair of Grammy nominations in 2009 for its Harmonia Mundi album Tarik O'Reagan: Threshold of Night. Conspirare, under Johnson, won its first Grammy Award in 2015 for The Sacred Spirit of Russia. In 2019, Conspirare released Hope of Living: Choral Music of Jake Runestad, earning itself another Grammy nomination.