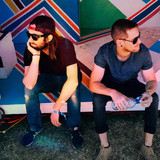 Black Boy Peaches are an alt-indie rock band from Dunedin, New Zealand. Driven by guitars, keyboards, and drums, their sound has been compared to the FOALS, Coldplay and Kings of Leon. Black Boy Peaches have a history of collaboration with other musicians but brothers Hamish (acoustic guitar/vocals) and Tom (multi-instrumentalist) have been the core songwriters for the band for the last 8 years. Starting in 2009, Black Boy Peaches dove into creating an alternative pop/indie record titled ‘Slasher.’ They moved quickly forward, releasing a second album in 2010 named for the fourth track ‘Company Feel Good’. During this phase of writing and recording, the band drew influence from heavy-hitting rock bands such as the @Foo Fighters, @Fall Out Boy and the quirky American Christian act @Family Force 5. Their 2016 album was mostly recorded in Auckland, New Zealand, with production completed on return to Dunedin. ‘Start Again’ was an ode to change. It stands as tangible evidence of a process undertaken during 2012-2015 in which new passion and fresh creative expression was sought. 2 of their songs from the album ‘Diamonds’ and ‘Otherside’ drew interest from Christian radio stations and international Spotify playlists. Recent release ‘Dark Days’ is a brooding rock track produced by Black Boy Peaches and mixed by Nashville producer/songwriter Geoff Duncan. Lyrically, it reflects on a situation in which reconciliation is needed, but the step to overcome the turmoil is not taken.