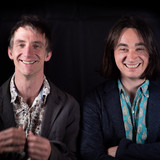 Broom Bezzums deliver mesmerising performances, seamlessly swapping and blending guitars, fiddle, mandola, Northumbrian pipes and percussion to create a diverse backdrop for their contrasting vocal timbres. Respected folk broadcaster Andy Kershaw saw the band live and exclaimed: "They've got it – instinctively." Originally from the Black Country and Northumberland respectively, Mark Bloomer and Andrew Cadie were both living in Germany when they met and formed Broom Bezzums in 2005. Performing to non-native audiences led them to thoroughly re-think how traditional music could be delivered to make it an involving and entertaining experience for the uninitiated. Thanks to their warm personalities, obvious emotional connection to the material, quick wit, remarkable musicianship and appealing voices, the pair quickly became hot property on the German music scene. Few acts manage to attract a wider, non-folk audience and please the traditionalists at the same time, but Broom Bezzums somehow bridge the gap with ease. As a testament to their wide appeal, Cadie's original song Keep Hauling has become a sing-along anthem for Devonian acoustic super-group Show of Hands, who sang it with the whole audience as an encore at a packed Royal Albert Hall. Not long before that, the BBC Gaelic language station in Scotland RADIO NAN GÀIDHEAL made Broom Bezzums' No Smaller Than the World their Record of the Week.