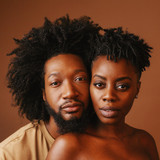 RAII (pronounced Rye) & Whitney are a husband and wife, Soul Pop performing/songwriting/producing Duo. Although many young entertainers write, perform and sing; very few have had the opportunity to do so while sharing some of the world’s biggest stages with some of the most renowned stars...and their significant other. That is the case of RAII and Whitney, who married in August of 2010 in RAII’s hometown of Chicago. With a friendship of over 17 years and romantic involvement for over 12 years, the couple represents the merging of love and music. Additionally, RAII and Whitney have worked together as supporting vocalists for International superstars like Alicia Keys, Ed Sheeran, Estelle, Common, Emeli Sande and many others as well as performed in house bands for various tv and award shows. RAII & Whitney appeared on Season 11 of America's Got Talent and headlined 2 winter tours in Switzerland. In the process of their touring, they are finding time to work on their joint album as well as their agency His & Her Entertainment, which trains and cultivates other creatives. They have released their debut single “No Worries Step Clap” as well as their debut EP entitled "Heart Hope". RAII & Whitney are currently writing and recording original music for various upcoming projects and are excited to share their music with the world.