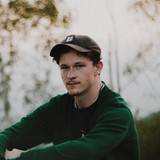 Captivated by the atmospheric vibe and the calm of ambient music, as well as the state of absolute ecstasy that provokes the powerful beat of techno, Fejká decided to explore the perfect balance between both.   Brian Zajak, aka Fejká began his musical career at the age of 17. Torn between the dreamy soft atmosphere of ambient music, and the hard punchy vibe of techno, Fejká couldn’t decide which direction his music production would take. “Day/night, dream/dance, slow/fast – music was always split into two worlds for me” he says. Thus, he decided to experiment with both, finding the perfect sweet spot between chill and dance music.   Drawn to artists such as Christian Löffler, HVOB

and Kiasmos , the appeal of his style lies in its varied influences, and ability to harness the best of two contrasting genres. In the end, it was Christian Löffler