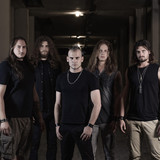 Athrox is the brainchild of the guitar player Sandro “Syro” Seravalle and the drummer Alessandro “Aroon” Brandi, with the addition of the guitar player Francesco “Frank” Capitoni and the bass player Andrea “Lobo” Capitani. The lineup found its final shape with the singer Giancarlo “Ian” Picchianti. With these members, Athrox started the songwriting process for their first full lenght album called “Are You Alive?”, featuring 11 brand new heavy metal tracks, released by Red Cat Records in 2016. Athrox’s music style is a powerful mixture of heavy metal with thrash and progressive elements which brought the band to a great response from critics and audience. In “Through the Mirror”, the second album released on 9 November 2018 via Revalve Records, each song talks about different stories told by a different character through a mirror, talking about the problems of humanity. The “mirror” is the true protagonist of our album: on the outside we appear almost “perfect” in what we want to show, but then inside we hide anxieties, fears, recondite traumatic experiences that affect our inner self. The live activity has led Athrox to share the stage with great artists like Iced Earth, Armored Saint, Ross The Boss, Phil Campbell, David Ellefson and many others.