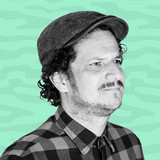 Mr. Kowalsky is a Costa Rican-born, Paris-based, internationally-minded musician, frequently touring in Europe, Latin America, and the United States, and singing in English, French, and his native Spanish.

He calls his musical style “Surf Rock Reggae,” wherein he explores the roots of reggae and mixes them with his varied influences, such as surf and rock accents. Mr. Kowalsky began his musical career in the mid-nineties in San José, Costa Rica, with his former band, 13 Millas de Libertad.