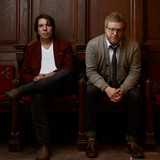 Hammock is Marc Byrd and Andrew Thompson. Since the band’s founding in 2003, when they began collaborating to escape Nashville songwriting circles, Hammock have released a litany of acclaimed albums, masterfully tracing across sub-genres of neoclassical, ambient, shoegaze, and post-rock. For all Hammock’s reach in left-of-center spaces — and the praise that’s been heaped on them by Pitchfork, BBC, The Wire, NPR, and Ricky Gervais — it’s worth remembering that Byrd and Thompson hail from, respectively, a small town in Arkansas and a 102-acre farm in Tennessee, far from the world’s experimental centers. Hammock’s work has always represented a natural flow of emotional instincts with little intentional relationship to theory, much as it sounds as painstakingly molded as anything from the avant-garde. One of Hammock’s career defining works, the Mysterium, Universalis, and Silencia trilogy came to a close in 2019. Emerging from the silence, a period that brought with it the global pandemic of Covid-19 that has kept loved ones apart, conscripted months upon months of isolation, and roused directionless longing for escape, Hammock presents Elsewhere. Recorded by Byrd and Thompson at their homes, apart and with minimal equipment, Elsewhere serves as a gateway to another place, materializes feelings of separation and loss without closure, and calls listeners back to live their lives – not spend them longing to be something or somewhere else.