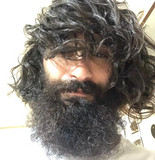 Ali Shojaei, known as Alis is a poet, rapper. He was born in (East side) Afasarie, Tehran, Iran at 1988. Now based in west side Tehran, Iran. His father has a big role in his life and was his inspiration; his job was metal machinery, by the way this tough job has handed down to him after his father passed away and he is doing it as a living. He has further education in industrial design and he is very into agriculture ،microbiology of soil ،organic fertilizers and synthetic lights. He has been singing officially since 2009, although he has been writing poem since 2007. In 2016 he founded Artesh Crew which is an underground Hip-Hop organization. His first single track released in 2012 called "Kesheshe Maghz". He released several single tracks from 2012 to 2018, and his first Album called "Sarzamine Ajayeb" released in November 2018. Artesh Crew, officially released 3 albums and 19 single tracks from 2017 to 2020. Currently he is working on several single tracks. Stay Tuned!