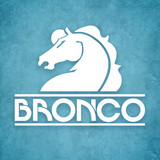 From Apodaca, Mexico, Bronco's modern take on the norteño style in the '80s and '90s helped earn them a number of international hits. Selling more than 12 million albums, they have become one of the most legendary grupos in Mexican music history. Band members Jose Guadalupe "El Negro" Esparza, Ramiro Delgado, Javier Villareal, and Jose Luis Villareal crafted a sound that paid tribute to the norteño tradition while incorporating modern instruments like keyboards, as well as a more melodic pop style and elaborate costumes. Their recordings achieved solid sales in the U.S., and their recording Pura Sangre earned gold and platinum records in Chile, Argentina, Bolivia, and Paraguay, as well as in Mexico. In 1993, they became television stars. The had an acting role in the prime-time soap opera Dos Mujeres un Camino, on Televisia, and provided the theme song. Constantly on the road and under pressure to record and promote their albums led to Esparza's announcement that he was leaving to pursue a solo career in 1996. Rather than try to replace him, Bronco decided to split. Their final album was 1997's La Ultima Huella. The breakup lasted six years, during which time the band's catalog and various compilations continued not only to sell, but to chart. Esparza issued numerous successful solo albums

in the aftermath, while his former bandmates participated in a variety of projects. In 2003, Bronco announced a reunion. Due to a dispute with their former manager, they were legally prevented from using their band's name in Mexico. Undaunted, they chose to carry on as Bronco el Gigante de America. Their 2004 album, Sin Riendas, went straight to number one on both the Latin Albums and Mexican Regional Albums charts. Throughout the rest of the decade and into the 21st century, Bronco's recordings continued to chart: Between between 1987 and 2012 they placed no less than 16 albums in the Top Ten on the Mexican Regional Albums charts -- including six number ones. Six more entered the Top 20. 2012 also proved a tragic year for Bronco: Jose Luis Villarreal ("Choche") passed away, and former keyboardist