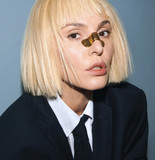 Tamta was born and raised in Georgia. She moved to Greece at the age of 22 and took part in the TV show “Greek Idol”, winning the 2nd place. She is currently one of the most successful and influential artists in the Greek pop music industry, and also considered as one of the best vocalists and performers in Greece. The press usually refers to her as a “fashion icon” and as a “Modern Cinderella” due to her fashion choices and her extraordinary achievements of her life and career. Up until today, she has released 4 Studio Albums, 12 Digital Singles and 26 Music Videos. She has won a lot of awards and numerous award nominations. Parallel to her stunning music career she has starred in acclaimed musicals such as “Rent” (as Mimi) and “Cabaret” (as Sally Bowls), being chosen for the leading role of the musical, receiving the best reviews from the audience and theater critics. Within the time period of 2014 -2018 she became one of the judges in the talent show “X-Factor” both in Georgia and in Greece, a determinant experience that accelerated her popularity and fame in very high levels in both countries. Tamta has performed in numerous festivals, clubs and music events all around the world from Georgia to Australia. She will represent Cyprus in the Eurovision Song Contest 2019 with the song “Replay”.