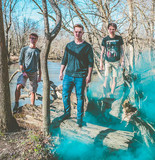 Indie Rock/Blues Rock/Progressive Rock trio based out of Columbus, Ohio.  Formed in December of 2016, while all the members were in middle school. The Rapid Jags have a sound reminiscent of the 2000s Indie Rock and Blues Rock scene, mixed with 1960s Psychedelic Rock, 1970s Progressive Rock, and modern Emo/Metalcore tendencies. They have a wide array of influences such as Jimi Hendrix, Styx, The Black Keys, The White Stripes, Arctic Monkeys, Stevie Wonder, Yes, Animals As Leaders, and Fall Out Boy.   After recording many different demos, The Rapid Jags released their first EP entitled, New Day, on August 2nd, 2019. This EP was written and recorded completely on a Tascam 8-Track in the summer of 2019. In November 2020, the band recorded their debut full-length album, titled “Awakening”, which was recorded and produced by Jakob Mooney of Mooney Recordings. The album was released on January 8, 2021.