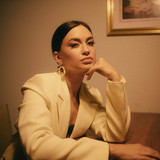 Entering Nashville as a non-country artist, TAELA has paved her own way towards success in music city. After writing music and securing a slot on Austin City Limits in 2019, TAELA’s unique artistry caught the attention of Kobalt Music Publishing. They believed in her relatability and spunky storytelling, signing her after her 2019 success. Songwriting has been an outlet for TAELA ever since she was young. She used her talent in order to cope with the depression and anxiety she experienced from past bullying and abuse. TAELA has continued to express the emotions of a 20-something growing up in the age of flash, glamor, and social media. Her push towards authenticity in a world of false portrayal sets her apart in the alternative pop world. With influences such as Joss Stone, Norah Jones, and Tash Sultana, TAELA blends old school tones with layered bass and fast-paced production. This combination has created excitement for more music to come. She is now managed by Make Wake Artists in Nashville, Tennessee, where she is aiming to launch the style that she has been crafting since her last release.