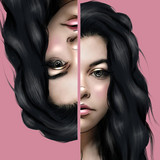 "From her brightly colored hair to her sound that infuses indie pop with shades of alternative, to her loving and quirky relationship with her fans, Emily Cole is an authentic human in a world full of social media carbon copies." Emily Cole is a Houston/NYC recording artist, pop/alternative singer/songwriter playing shows in the greater Houston area.

She accompanies herself with guitar, ukulele, keys; she plays as a solo artist, as a duo, as well as with her full band. ​ In October, 2015, Emily Cole released her self-titled debut album, Emily Cole. Her single, Karma, was released on 11/11/18, and is available everywhere now. While Emily is in the studio working on her next album, she still keeps busy with performing. You can find her gigs, press releases, and more at emilycoleofficial.com