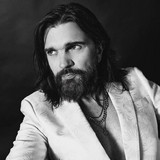 that went Top Ten at Latin radio. He followed with the single and video for "Aurora," featuring upcoming rapper and fellow Medellin-born Crudo Means Raw. On November 14, Juanes was honored as the 2019 Latin Recording Academy Person of the Year as they recognized his "creative artistry, unprecedented humanitarian efforts, support for rising artists, and philanthropic contributions to the world." He was also nominated for three Latin Grammys including Song of the Year and Record of the Year. On November 22, Juanes issued his eighth album, Más Futuro Que Pasado, on which he experimented with the sounds of Colombian popular music such as cumbia, guasca, and vallenato, and melded them to rock, trap, and reggaeton. In addition to the singles listed above, the set included collaborations with Christian Nodal and Fuego. Juanes was inspired to experiment with wedding folk, popular traditional styles, and urban music by working with young co-producers including Andrés and Mauricio, Mosty, Rafael Arcaute, Tainy, Luis Salazar, Ily Wonder, DVLP, and Sky. ~ Jason Birchmeier, Rovi