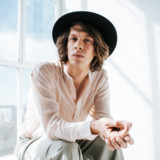 German singer/songwriter Max Prosa was born Max Podeschwig in Berlin in 1990. After quitting his studies in both physics and philosophy, Prosa applied at the Pop Academy in Mannheim but was rejected. In 2010, he was able to participate in the Pop Academy's Bandpool project and was discovered in 2011 by Clueso, who invited Prosa to tour with him as a supporting act. After appearing on Inas Nacht, the TV show of singer Ina Müller, Prosa released his debut album, Die Phantasie Wird Siegen, on Columbia in early 2012. The album reached number 20 on the German album charts and drew comparisons to Bob Dylan's early work, leading to Prosa's first solo tour in 2012. ~ Christian Genzel, Rovi