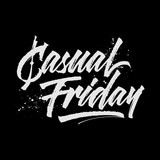 CASUAL FRIDAY is an Indie Rock band from Frankfurt/Germany playing an energetic style of guitar- and piano-based original tracks. While CASUAL FRIDAY’s sound is influenced heavily by British bands of the last decades, such as Arctic Monkeys, The Kooks, Coldplay, Keane and David Bowie, they combine these sounds in a way that has not been heard before. CASUAL FRIDAY combine their unique and energetic sound with timeless lyrics about love, life and society that everyone can connect to. With more than 100 gigs all around Germany and their first album with release in fall 2017 the guys are ready for their next level.