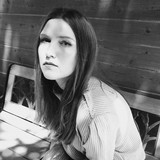 Stella Sommer has gained quite a reputation in her homeland as one of the most talented songwriters of Germany. She has been the singer and songwriter of her project "Die Heiterkeit" for 10 years now, releasing 4 criticially acclaimed albums. In 2018 she released her solo debut album "13 Kinds of Happiness",