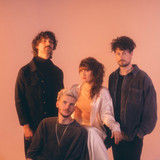 After having generated a considerable amount of buzz among Southern Germany’s prospering indie music scene, Everdeen is ready for the next step. With their new full-length album “Stay”, the indie rock quartet boldly navigates to unknown horizons, discovering new territories and flavors for their otherworldly indie rock. Formed by San Franciscan Ian Stahl and Turkish/German singer Sümeyra in California, both eventually relocated to Stuttgart where they met local drummer Thommy Mross and bassist Danny Pflumm. A truly intercontinental quartet was born with a sound on par with international standards set by the UK or Scandinavia. “Stay” isn’t just their strongest release, brimming with wonderfully atmospheric songs; it’s also their most poignant, confident work so far, culminating in triumphantly climaxing walls of sound. Natural evolution made them become more accessible while at the same time preserving this ghostly aura artists like Florence + the Machine or London Grammar breathe. Gems like the euphorically banging opener “This Place”, “Don’t Give Up The Ghost” or the gloriously pushing “Heart Shaped Gutter” represent the wild, the ecstatic and joyous side of the three-piece, while songs like the elegiac sundowner “Colours” or “By The Water” stand for the twilight in their hearts, best consumed after dark. “Stay”, in short, is for the dreamers. For the believers. For the ones who refuse to let hope die even when it’s darkest. In times like these, we have all earned this.