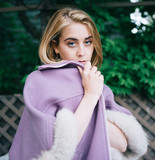 Lyra's music is an eclectic blend of indie-pop and piano whimsy, focusing on compelling, surreal lyrics.

After releasing a series of home recordings, Lyra would enter the studio to record her debut record, The Language of Eyes, in early 2015. By the end of the year, the album would finish at #7 on the CJSR Radio top 300 albums of 2015, and Lyra would garner four award nominations at the 2016 Edmonton Music Awards.