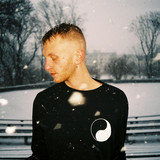 It’s a rare occurrence, but once in a while a fully-formed new talent will emerge from seemingly out of nowhere. That’s exactly what happened when Elias debuted in 2015 with Revolution. Here was an artist with a voice that was truly something else. Not only was it striking in its nuance and in its power, but it also was the voice of a man who has seemingly weathered a lifetime’s worth of emotional upheaval, and had learned how to convey love, loss and devastation with utter sincerity. And yet Elias was still just eighteen-years-old. The reaction was suitably emphatic. Noisey described him as “a concoction of James Blake soulfulness and Bon Iver potential”, while i-D prompted comparisons with FKA twigs, Spooky Black, Anthony Hamilton and Sam Cooke as they praised his “gorgeously profound voice.” Fast forward to 2019, one debut album, one ballet, two Swedish Grammy nominations and two Gold records later Elias is gearing up to release the new EP HIM in 2020 and have already showcased the two singles I Give You The Best and Neon Lights! Stay tuned for more amazing music!