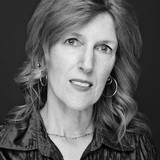 Anders grew up in Berkeley, California, collected degrees from UC Santa Cruz and SF State, then she got herself into a bunch of weird and cool musical situations. Among the weird: delivering singing telegrams wearing a table around her waist, and teaching doo-wop versions of Beatles songs to Buddhist monks. Among the cool: stints in a cappella, rock, jazz and Motown bands that played throughout northern California. Anders spent the 1980s fronting her rock band Slantstep in the Bay Area. After moving to Los Angeles in 1990 and meeting her future husband Tom Manche, they formed, then toured and recorded with their band Susan’s Room for the rest of the decade.