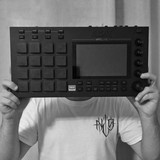 Toad is an embodiment of street culture : a skater at heart, he is also a skilled turntablist and a producer whose tracks pay respect to the classic boom bap sound. Having started as a dj in 2009, he stepped into the studio in 2010 and started churning out productions for short films, instrumental projects and local hip hop artists such as Bloody Hawk, Nimbus D, Moris and Mustirios Tupos. He has also shared the stage as a turntablist with hip hop artists such as Vevilos and Tetarti Ageli. His sets comprise mostly hip hop from old school to the new with the use of turntable techniques like scratching and beat juggling.