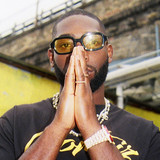 Everything since Tinie’s astronomical breakout hit ‘Pass Out’ in 2010 might seem like it’s come easy. It’s win after win, number one after number one (3 Top Ten albums and 7 No.1s, to be exact.) Tinie might just have been the catalyst that paved the way for the current explosion of Black music and culture in Britain. This new period in his career signals a chance for Tinie to redefine his narrative, and to remind everyone he’s still very much on top of his game. His new single, ‘Love Me Like This’ featuring rising Swedish vocal powerhouse Maia Wright pays homage to the 2001 classic ‘Do You Really Like It?’ from DJ Pied Piper and the Masters of Ceremonies. The track is a celebration of London being the epicentre of black culture and pays homage to the Y2K era which not only inspired Tinie to put pen to paper at the beginning of his career, but laid the foundation for a hit-making decade of Hip-Hop music worldwide. Marking the first of a string of releases, ‘Love Me Like This’ sets the tone for what’s to come from Tinie, one of UK’s most celebrated and decorated voices.