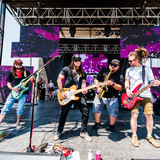 Audic Empire has been creating music for almost a decade, each year growing their audience with reliable momentum. " " Their live show captures an originally intense experience that you won't find on any other stage. The lineup features a pair of sensational singer/songwriters, (Ronnie Bowen, James Tobias) with harmonies and contrast that compliment with eloquence. Enhancing the mold of this groups genre bending sound, you hear Austin TX native Travis Brown, and his jaw dropping lead guitar. His pure tone and refined skill will emerge instantly captivating listeners of every demograohic. With his superior melodies that blend model blues riffs with prodigious scales; any audience is astonished to witness this young man wield his trusted fender strat. Reincarnating his own modern twists from styles of his legendary blues predecessors, like SRV and Hendrix. Encompassing each distictive influence, Audic's airtight rhythm section seals the deal for this one-of-a-kind group. Between the bass (James Tobias), drums (Jess Leonard) and keys (Carver Ripley) trading licks in the pocket with psychedelic/dub readiness , their groove keeps an audience bouncing

and intrigued within each note. Audic Empire just released their latest LP "Head Change" in June of 2020 featuring several renown artists though out the tracklist. Such as: Brandon Hardesty of Bumpin Uglies. Vana Liya from LAW RecordsDread Kennedy from Ital Vibes and more. "One SOULution through a creative bind"