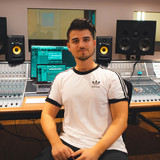 KARL KANE started to produce at the age of 14 and recorded his friends vocals. He began with DJing and started to build a reputation in Germany. Combining House, EDM and Black Music, the modern Technology and Old School Turntablism, he created his very own style and impressed the audiences with it. 2017 he released his first club single "Unicorn (Ride Me Tonight)" [feat. Yan & Electro Train] under his former ego Karl Koks and started to reach more and more people with his music. It was followed up by 2 Remix Releases and guest appearances on local Radio Shows. In

2020 he released his Future House EP called Poseidon EP with House Session Records filled with fresh new sounds for the stages! His Single Back to You inspired by the covid-19 situation went straight in the hearts of his fans. With „Can You Hear Me“ he showed a new way of Slap House, which is one of the most successfull genres at the time. His singles „Feeling" and "Festival" are for the festival lovers, who were upset as all festivals were cancelled this year. Fire is his way to rock any Club Dancefloor and "Leo" represents his love for Future Bounce. Enjoy the Silence is his first release in 2021 and the start of a new production style. Followed by his latest Single DJ Got Us Fallin’ in Love Again with his friend Steve Baker he brings more and more dancefloor records and also started to release his music monthly. With his experience with more than 500 Bookings he won the 2nd Place at the German DJ Contest.