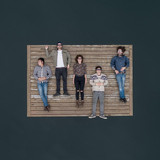 “Influenced as much by Old Man Luedecke as by Arcade Fire, it is as if Pete Seeger met up with the Smashing Pumpkins for a ski and a jam. The different musical influences collide with intention and precision and avoid hipster cliché.” - Exclaim “Arguably the most real, raw, and evocative album of their burgeoning career. (Like A Rising Sun)” — Music Life Magazine Shred Kelly is a five piece, alternative folk rock band that emerged from the heart of the Canadian Rockies in 2009. Over the past decade the band have taken their highly energetic live show from humble beginnings on the Canadian ski-town circuit to the international stage. The band’s striking and energy-packed sound has evolved from their eclectic musical influences and their unique experiences as individuals. Their progressive pairing of acoustic instrumentation with electric counterparts, harmonies, and driving rhythm, continues to develop and reach new heights. Over the years, Shred Kelly has had the opportunity to perform across Canada and internationally at festivals such as Reeperbahn Festival, Australian Music Week, Folk Alliance, SXSW, Winnipeg Folk Festival, Ottawa Bluesfest, Mariposa Folk Festival, SKOOKUM Festival, and Kaslo Jazz Etc Festival. Tim Newton Sage McBride Jordan Vlasschaert Ryan Mildenberger Ty West